While the Western is not a genre one normally associates with apocalyptic scenarios, the fact that Westerns often harbor religious and Biblical subtexts and are loaded with gunfighter-as-Christ figure imagery (and it must be said sometimes anti-Christian imagery), suggests otherwise.  The apocalyptic Western can be traced as far back as the great William S. Hart’s masterpiece, Hell’s Hinges (1916), where Hart plays an outlaw gunfighter named (symbolically, as are many Western characters) Blaze Tracy who undergoes a profound redemption process after meeting a parson’s holier than thou sister. A major part of his redemption is ridding the lawless town of Hell’s Hinges of its ‘evil’, embodied (as often is in the Western) in a huge fire that purifies as it destroys. In this case (as in most Westerns) the town, or a location that represents the ‘bad’, such as a saloon, is the source of the redemptive fire. Hart starts the fire by shooting at a ceiling kerosene lamp, and while the fire rages on, tells the victims: (title card): 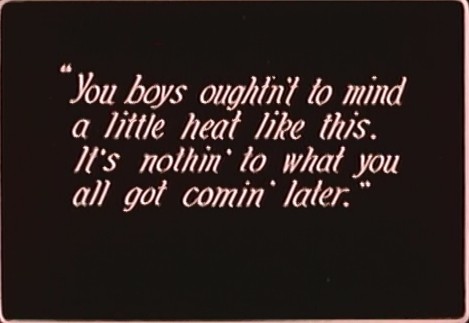 In 1994, Hell’s Hinges was selected for preservation in the National Film Registry of the Library of Congress, being deemed “culturally, historically, or aesthetically significant”, and is considered by some to be one of the finest silent Westerns.